The children had been very interested in our ‘Around the World ‘ day at the beginning of June so we decided to revisit the topic and spend longer introducing them to other countries. We had lots of activities to use as a starting points and the children were interested in the large map of the world wanting to know where they lived.

We talked about Russia and compared the sizes and drew around a set of Russian nesting dolls. We made pictures using glue and sand and made pyramid pictures from rectangles of paper whist talking about deserts and Egypt. Australia was introduced through it’s varied wildlife and the children made vegemite sandwiches. The children used their mathematical skills to build tall towers and compare sizes as they looked at pictures of skyscrapers in New York. We made red fans from China and made the South African flag and designed flags of our own. Italy was introduced as we explored painting with dry and cooked pasta  comparing the different marks we made.

The children also explored fish from around the world as a sea cod, trout and squid was available for them to touch (with gloves on).

Our summer fete was a great success contributing £150 towards the garden improvements.
We said goodbye to our school leavers who enjoyed their farewell party at Kalula  Kids soft play and we were excited to meet Peppa Pig who popped in to see us. 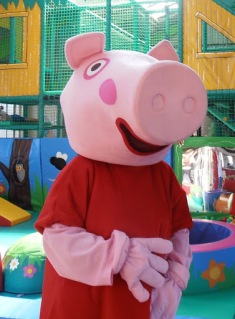 We are members of the Pre-School Learning Alliance.

We are constantly in touch with new thinking in the field of child education and care.

Our staff receive regular, up-to-date training in all areas of skills and knowledge.

Our activities are carefully planned on a weekly basis to reflect the children’s current interests and play themes, always building and extending previous learning and development.